Ken Gillgren is the Tech Strategist at RBAC. Ken was raised in Milwaukee and has been in Seattle since 1992. One of his favorite books is Smiley’s People. His favorite dish is a Korean dish called Sundubu (A soft tofu stew) with typical Korean side dishes. Two of his favorite movies are Fearless with Jeff Bridges and A Beautiful Mind. One of his favorite places to travel to with his wife is the San Juan Islands. There is whale watching observatory in the lighthouse where there is a chance to see some wildlife.

RBAC has allowed Ken to bring parts of his life together, his community development work and tech skills especially, freedom next. He is grateful to be in a neighborhood as lively and dynamic as Rainier Beach.

<strong>Patrice Thomas is the strategist at RBAC. She has been working for RBAC since 2012. Her favorite movie is Tombstone. Tombstone is a country-western movie about family, friends and making good or bad decisions. Her favorite subject in school was science. She likes to sleep when she is not working in a room that is preferably 80 degrees Patrice likes watching TV and Seattle weather. Take it easy type of days.  Born and raised in the South End of Seattle. Her favorite place to travel to is New Orleans. Her mom’s side of the family is from Louisiana. They’re not from New Orleans but enjoys New Orleans because it has so much history, art and free culture. Even throughout the storms/weather, New Orleans is still a great place to visit. She loves soul food. Besides that, her favorite dish is jerk chicken pasta from Bahama Breeze. And if she has enough room in her stomach she gets a Key Lime pie and a banana shake.</strong>

<strong>One of the things she is proudest of during her time at RBAC is helping them get into the office space they are in now. She knew the property owner because her mom rents a house from him. He owns multiple houses in Rainier Beach and he actually wanted to develop the property that RBAC is currently located. A job that helped improve people’s lives. She was able to gain her professional legs and prowess from a neighborhood organization. A neighborhood that she is from and grew up in.</strong>

The Corner Greeters is a program designed to lower incidents that contribute to youth crime in Rainier Beach. Based on data from Seattle Police Department through a data agreement with George Mason University on behalf of Rainier Beach A Beautiful Safe Place for Youth initiative we’ve learned there are five areas where the most youth crimes were occurring.

.  This is where the term “hotspots” originated from. The Corner Greeters are all young adults that are focused on improving their neighborhood. Currently, the Corner Greeters activate the five hotspots or more affectionately known as “pearls” located at Rainier and Henderson, Rose Street, Lake Washington, Safeway, and the Rainier Beach Light Rail Station.  On Corner Greeter events and scouting, teams are formed and each team member has a role. “Beautification, Engager, Scribe, or Freedomnet”. The Beautification Squad goes to 1 of 5 of those hotspots each week and works on beautifying the area. By picking up litter or reporting things that need to be fixed. Engagers and scribes interact with the community and figuring out what the needs are in this community. If you stop by a Corner Greeter event you will see how the safety surveys help us do that,  and last but not least the Freedomnet Squad. The FreedomNet team takes pictures and videos of the events that RBAC attends. Twitter, Instagram, and Facebook are the social media platforms the RBAC exists on. We at RBAC believe in creating our own news.

This is Jeremiah Conyers or “JJ” one of the RBAC Corner Greeters. He steps a little outside of his traditional Corner Greeter duties to compile twitter Freedom Net postings into moments that you can find on the Freedom Net Website   http://www.seseattlefreedomnet.org/      He has been working with RBAC for a couple of years now. His preferred social media site is Twitter. He is a great tweeter and retweet, find some of the headlines here @FN_JConyers. He is working from the RBAC office. The RBAC office is actually a house that has been repurposed to make it into an office space. Which you may have noticed if you have ever visited the RBAC office. You can find him frequently on the media team for any event that RBAC hosts. He like helping out with the social media/Freedomnet work that RBAC does.  He also likes picking up litter and listening to his music and letting his imagination roam wild. He enjoys working with his friends here at RBAC. A fun fact is that the computer he is working on in front of him has a name! Actually, all of RBAC’s desktops have names. The one Jeremiah is working on is called Casades. The one I am typing this article on is called Olympics. There is one upstairs called Kubota. The computers all have a northwestern theme.  Jeremiah graduated from Rainier Beach High School. He also grew up and was raised in South Seattle. JJ was also a part of the Breakdancing team at Rainier Beach High School. If you come to any of RBAC events you may find him dancing if there is a good song. He played soccer when he was younger. JJ is also a lover of anime, manga, and video games.

Some fun facts about Jeremiah are he loves vanilla ice cream and spaghetti. If he could pick any superpower it would be energy manipulation. His favorite color is sapphire blue.

This gentleman is Messiah who is a part of the Beach 5 program. He is also the person responsible for most of the videos that are on the RBAC or FreedomNet website. Also the person responsible for the Corner Greeters flyer design and the Facebook banner on Rainier Beach’s website.  A lot of time he works alone on the Olympics computer. He estimates that he has done at least 7-10 video for RBAC. Considering how labor intensive video editing can be this is very impressive. He goes to school for design, animation, and things of that nature. So in a couple of years, you can find him in the rolling credits of the next great animated movie.  He is currently working on a video for the Othello Square Festival that RBAC recently dispatched a Community Newz team to. Before he started on this video he added the finishing touches on the Rainier Beach Emergency Communication Emergency Hub drill video. Look for his work up on the website soon! Messiah also graduated from Rainier Beach High School and was also a member of the breakdancing team. If you are lucky enough you might find JJ and Messiah in a dance battle at one of our events.

Messiah works with a lot of the technical stuff. He does a lot of media management and handles a lot of RBAC’s social media work. He is the person to go to if you need help with a camera or any other equipment. He has been doing more of design work. Making posters and focusing on our physical media.   His first personal project was the banner for our Facebook page. Which turned out very well. For the summer he is working on a personal project creating a brochure of all the art installments in the Rainier Beach. Hopefully, his project can be converted digitally shown on the website. His favorite color is blue although he isn’t sure which shade of blue. His favorite place that he has traveled to is Hawaii. The sand and the ocean are beautiful there. He also has a lot a love for Los Angeles. Some things you should know about him are that he’s very nice, and is really close to his friends.  If he could pick any superpower he would pick teleportation. Although he enjoys riding his bike, teleportation would be great in a pinch.

Amanda Lopez-Castanon is our Food Innovation Center Director. She’s the lady on the left in the picture below. The picture is of the judges for the first Rainier Beach Grill Off Held at Beer Sheva Park. It was the third in a series of gatherings there to promote the development of a RB waterfront at Beer Sheva Park with a 50’x150′ paved boardwalk.

Anyway Amanda does much more than judge culinary arts contest. She has a history of running large scale food service venues. It’s this experience, and the fact she’s a great cook,  that excited RBAC’s leadership as we sought skilled workers to help develop the “Food Innovation Center” in Rainier Beach. Amanda has been at RBAC for almost three months. Her official title is director of the Food Innovation Center. Which is a project that being incorporated from the neighborhood plan many years ago.A facility designed around  some programs that will help community members learn how to start a business, give them a space to support their food business She hails from Lafayette, LA. She came to Seattle after living in Los Angeles for a number of years. She wanted to try something new and moved to Seattle. In her free time she likes to play soccer with her son and husband. She loves spending time with her family. She loves cooking and getting creative with food! She likes to work in her yard, do DIY projects in her house, and dinner parties. If she could eat one food for the rest of her life it would be Pho. If it was her last meal she would have a fried chicken dinner.  Her favorite book is Native Son especially as she got older and grew to understand it better. One of her favorite places to travel to is Mexico. It’s a big country with lots to explore. The cultures, climates , and foods are different. She also like Europe because there is a lot of history there. She believes working at RBAC can contribute a lot to her life and the work she does. RBAC is community focused and she has always been a person that wants to connect with her community. She is enjoying her time at RBAC. 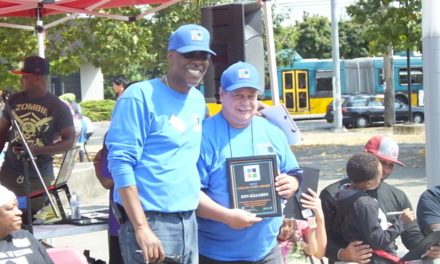