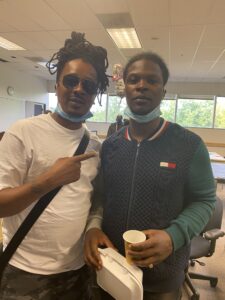 Eddie Grinnell has been continuing to hit the streets to find people interested in well-paid trade jobs. The city’s Priority Hire program is meant to ensure that people in the 98118 have access to the jobs created by the City’s construction projects, and Eddie makes sure residents have the skills necessary to get those jobs. Once someone has chosen a trade (electrician, carpenter, cement mason, welder, plumber, flagger, etc), Eddie connects them with a corresponding 11-week, unpaid pre-apprenticeship program. Once that is completed, he helps future tradesmen and women get paid apprenticeships, lasting 3-5 years and paying $24-$28 an hour. Then, he helps them complete the process by assisting 98118’s newest tradespeople in finding union jobs or journeymen carpentry jobs.

For the last couple of weeks, Eddie has been focusing on the Rainier Beach High School (RBHS) rebuild. He recently met with Virginia Bethea, an RBHS community advocate, and they are looking forward to working together to make sure people from the South End are hired for the high-paying construction jobs of the rebuild. BIPOC from distressed zip codes are entitled to make up 20% of the construction workers hired for a job. Eddie said, “This is a nice thing, building up the neighborhood. And that’s a lot of our focus at RBAC.” He also speaks weekly with John Bersche of Priority Hire, who is in contact with NBA legend and RBHS grad Jamal Crawford about the rebuild. Coincidentally, Eddie, who played basketball for Nathan Hale, played against Crawford, and remembered, “He’s pretty good.” The Rainier Beach gymnasium is named after Crawford — “Crawford Court” — who contributed financially to refurbishing the gym.

It’s worth noting that RBHS is currently the last school in the area to receive funding for a building update. Rather than receiving a total renovation at the time when they received BEX funding, RBHS underwent construction to get the buildings up to code in earthquake protection(?). Countless schools in Seattle have been put in the forefront for change with the support of the city and strong PTA’s. RBHS, which just so happens to be the most diverse school in the district, is just now getting the recognition it’s so desperately needed for the growth of the school and the students in it. In order for anything to grow, it needs to be placed in a setting with sufficient resources to aid the nourishment process but the students and staff of beach have been neglected for a long time.

Help shape the future of transit in Seattle! Nov. 17th