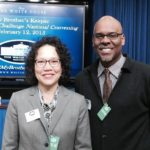 I was invited to attend the White House My Brother’s Keeper (MBK) Summit as a community representative by the City of Seattle. A prestigious opportunity for sure; my mother, wife and co-workers were excited, I suppose that’s all that matters really, in fact I was the one filled with skepticism. So the first question I wrote down, dead set on getting an answer to at 8:32 a.m. EST, was “What is it about this initiative that would make folk want to join in?” The fact is I belong to some fairly progressive circles and we contend the federal government has not been very good to our people. Well, hearing from Eric Holder and Valarie Jarrett didn’t generate the answer to my question. Panel after panel including the likes of philanthropists (one of whom threw $13 million into the pool) didn’t answer my question.

Presentations by White House staff talking about how to message your initiative didn’t answer my question. Presentation after presentation by local practitioners didn’t answer my question. Least you believe I wasn’t paying attention and just taking up space the remarks by Policylink’s Founder and Executive Director Angela Blackwell were very inspiring and thought provoking. She called for a fundamental shift in the way we talk about improving outcomes for boys and young men of color, highlighting our shared responsibility in focusing the conversation on how this population can achieve their real-life aspirations.

With this I agree, and submit to you one of our greatest challenges in this endeavor is overcoming the denigration of each other. We have to, when speaking and interacting with each other, use language that will sustain relationships now and into the future. Turns out I did not get the definitive answer to my top of the morning question until the very last minute I was there, 6.58 pm EST. At the closing reception, trying to find who to make conversation with (you know how that goes at affairs like this) I walked up to a lady from Orlando who happened to be standing by herself and mentioned my predicament. This is what she said, “MBK represents a next level, it will expand your platform, it will elevate your program to a national scale”. That my friends was the nugget I was looking for.

Let me stop here and describe what MBK is. It’s a five year $200 million plus public private partnership initiative intended to create better futures for African American males and other young people of color. There are six milestones President Obama wants to see the needle moved on 1. Entering school ready to learn, 2. Reading at grade level by third grade, 3. Graduating from high school ready for college and career, 4. Completing post-secondary education or training, 5. Successfully entering the workforce and 6. Reducing violence and providing a second chance. It started in September 2014 following the Trayvon Martin killing and that crazy verdict.

It compelled President Obama to issue a challenge to cities, towns, counties and tribes across the country to implement a coherent cradle-to-college-and-career strategy that includes these six milestones. He’s made it clear It is not a grand new federal program, but he does recognize his convening power and he wants to give young people a sense that their country cares about them and values them and is willing to invest in them. Seattle signed on and as a MBK community has accepted the call to action indicating its commitment to enacting sustainable change in our community in the milestones, cited above with a specific focus on #5 and #6. The fact is, according to this family engagement practitioner, if all youth and young adult serving programs currently operating in South Seattle, the Central Area and West Seattle were inputted into a three dimensional matrix each MBK milestone would be addressed. How well they are doing against those milestones is another question that we absolutely must answer. Is there a ray of hope that these programs, their leaders and families can see the MBK opportunity as theirs and begin working together on it? How about this… lets work to get city resources focused on this.

So here I am having returned to Seattle amid all the hoopla , having represented all of you, my dad (the late Jerry Davis), my heroes (Ralph Bunche, Malcolm X, John McKnight, Kareem Abdul Jabbar, Imhotep), my family (Shawn-married to for 30+ years, Kaila 28 and Jerrell 22) , and this city and guess what happened?

The Mayor of Seattle (Ed Murray) asked the CEO of Casey Family Programs (Dr. William Bell), where I work, if he would allow me to facilitate a planning committee process with the task of organizing a Youth Opportunity Summit (April 11), in the name of My Brother’s Keeper. Er uh….what do you think I said? First I called on my Lord and Savior Jesus Christ and then I said I’ll do it”. Actually I didn’t have a choice …my life is not my own. However my yes was buttressed by the fact that I knew Seattle had just signed on to Cities United (reducing Black Male homicide, http://www.citiesunited.org) and has also been named to the 2015 cohort of the National Forum on Youth Violence Prevention (a federal initiative that seeks to more effectively prevent youth and gang violence). Not only that I know that Seattle Public Schools has formed an African American Male Scholar Think Tank and that King County is getting ready to publish its Youth Action Plan. I also know that Rainier Beach is getting ready to launch an array of crime preventing interventions through it’s Beautiful Safe Place for Youth initiative funded by a Department of Justice Byrne grant. http://www.safeplaceforyouth.weebly.com.

There’s talk of a Southeast Opportunity Center, there’s a new Human Services Department Director (Catherine Lester), the Black Lives Matter movement is creatively moving forward, the No New Jim Crow folk are getting their legs under them, the national ASCAC and Arts School Network conferences are being held in Seattle this year. There are probably other things you know about that can be added to the mix. Dare I say…the Lord is moving, or the stars are aligning? Or do we risk missing the most important moment, this community building practitioner has seen since 1997, 18 years ago when Mayor Rice implemented neighborhood planning. I would venture a guess that it achieved maybe half of its potential for our neighborhood.

At any rate the Youth Opportunities Summit is April 11th. Are you invited? Yes. Who is the target for the Summit? You know who the target is. I’ll go a step further and say if you and your sphere of influence don’t see yourself as a part of this…shame on you. We need people young and old, we need the leading practitioners from all sectors – juvenile justice, education, child welfare, law enforcement, media, business, health, technology, clergy etc… etc…, etc… to rally now, being our best selves and bringing our best thinking. Joe Echevarria co-chair with Magic on the MBK National Convening Council says there is a near-perfect match between the skills most prized in these above fields and those we so often hear boys and young men of color needing to develop in order to succeed. We have an unparalleled opportunity, the window is open for only so long, (Obama leaves office in less the 18 months).

So while you may not be, in the name of our young people, interested in next level stuff, or expanding your platform, or elevating your program to a national scale or connecting your story to a presidential initiative or helping create an infrastructure of support – you can still keep your eyes open and watch a movement take us closer to where we need to be than one has in a long time. I’m Gregory Davis hit me at http://www.rbcoalition.org to lend a hand, finger, or fingernail. We will take whatever you have to offer.

Stories Spark Action at The Gathering