Almost every year RBAC and its friends acknowledge people in the neighborhood who contribute in a mighty way but somehow are “under the radar.” Their contributions, and what they mean to us as residents of Rainier Beach, are understated. The Rainier Beach Action Coalition keeps its eyes open year after year for these wonderful RB residents and stakeholders. We want to introduce a few to you today. They were awarded the distinction of Rainier Beach Unsung Hero for 2020, which, so far, has been a year to remember.

We absolutely had to start with Charity Jackson. You know her as the cherished daughter of Danielle “Pebbles” Jackson, founder of CHAMPS. Charity is ever present; where you see Danielle, you see Charity. She greets us, makes us smile, and is always willing to help. And she loves the Rainier Beach Back2School Bash (which was held on August 8 for the 18th year in a row this summer)! Always willing to give a hug — even during a pandemic — we always feel better when Charity is on the scene. Ashe’ (so be it) to Charity Jackson. 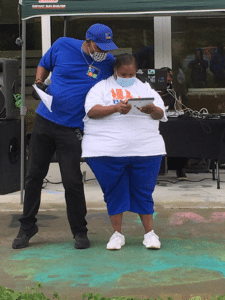 Washington Building Leaders of Change (WA-BLOC) a recipient for the second time for inspiring young adults and meeting the critical needs of families who live, work, study, play, organize and hold peace circles in the Rainier Beach neighborhood. They operated “Feed the Beach” this summer, a mutual aid effort to have healthy meals available during a pandemic. They were the first to respond to this need in our neighborhood and did not get credit for it. They inspire and train our young people to be organizers, yet they seem to fly “under the radar” when it comes to getting their rightful acclaim. Oh well, we love them. Here you see founders Jerrell Davis and Tyra Griffith who were present to receive the Rainier Beach Unsung Hero Award for 2020. Ashe’ WA-BLOC. 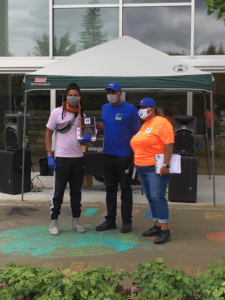 We all know Cinda Lu, a resident of the Rose Street Apartments. She has volunteered for everything. RBAC does an event; Cinda is there. RBAC joins its partners at their event; Cinda is there. Cinda’s ever-present commitment has gone “under the radar” in our estimation, and we want to thank her with the Rainier Beach Unsung Hero Award for 2020. Ashe’ Cinda Lium. 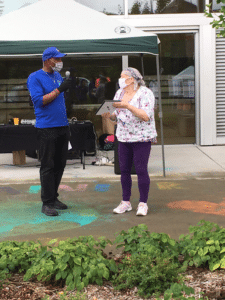 Makayla Miles was the editor of the RBHS newspaper as a senior, and since joining RBAC she has led the way to getting three, raised bed gardens built in the Rainier Beach neighborhood. Makayla Miles is a founding member of RBAC’s FreedomNet Editorial Board, where she coordinates content for RBAC’s website. She is also a scholar studying at Seattle Central Community College. Additionally, she is a budding journalist with a six part “Adulting 101” series in the works for both the South Seattle Emerald and Freedomnet. In our estimate, she is easily an Unsung Hero. Ashe’ Makayla MIles. 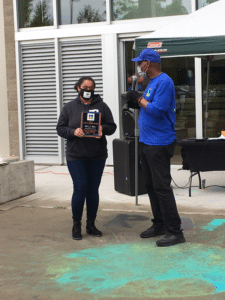 Other awardees not present are Tammy Morales, the District 2 City Council representative; David McIntosh, a local “man of faith” and educator; and the Gola Kitchen. Be on the lookout for other unsung heroes of Rainier Beach, and send their name to info@rbactioncoalition.org to be nominated for the Rainier Beach Unsung Hero Awards for 2021. 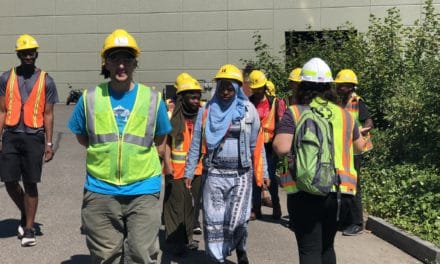