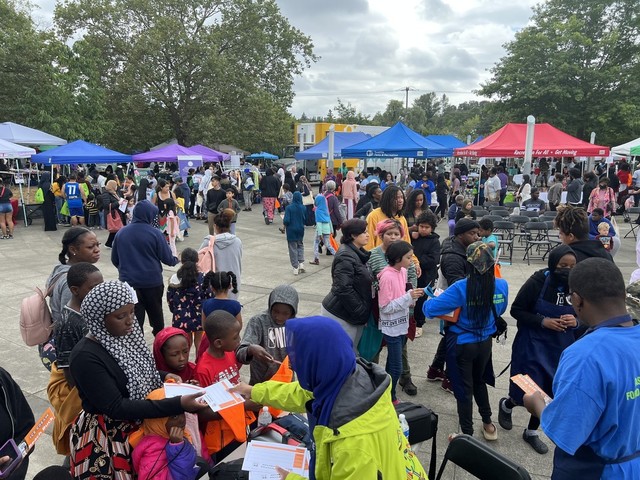 In March we started meeting with the planning team, looking back at last year’s community feedback, dreaming, imagining and discussing what the 2022 RB Back2School Bash (RB B2SB) would look like. At the end of June we ran into an issue, we were informed that the BIG DAY OF PLAY, an annual Seattle Parks event was on Saturday, August 20th, the same day as the RB B2SB so we decided to reschedule for the following week Saturday, August 27th. It didn’t look anything like how we started as there was something else brewing in the air. Fathers and Sons Together’s Barbershop Chat & Chew was meeting on the plaza the same day. So we met with Cathie and Larry Wilmore the organization’s founders and their event planner Bernice Upton and we decided to collaborate and the two events became one. This was such a powerful demonstration on FASTs part of faith, trust, confidence and genuine good neighborliness. Kudos to you Father and Sons Together.

The day of the event when I first arrived at 7:35am that morning the field was completely empty, it was windy and cold outside but thank goodness there was no rain in sight. The team of three that came with me started unloading the truck and SUV. We started setting up canopies right away. Around 8:30am Martha Winther, RB Community Center Director with Seattle Parks & Recreation took a pause from her vacation to make sure we had access to the equipment. We’re grateful for Martha, she always has RBAC. The RBAC staff and volunteers began to arrive as well setting up the backpack, info, show love and volunteer stations. At 9:30 am we would check in and get additional directions from “DA MAYOR” of Rainier Beach (that would be Mr. Gregory Davis) who started the Back2School Bash in 2004. In 2014 Mr. Davis asked (me) Danielle Jackson, Founder of CHAMPS Resource Service Center to be the Coordinator of the Back2School Bash, eight years later I’m still at it. By 10:30am vendors began to arrive, and the sun began to peak down on us throughout the plaza. The weather was perfect, not too hot, or too cold.

After the volunteer orientation, things really started moving and shaking on the field. To see the vision, we had been planning for 5 months then to see it speedily manifest before our eyes. It was amazing. In the midst of all the hustle and bustle there was a community coming together to serve the people. There were several different groups putting up canopies, tables, chairs, and signs. Then you have the vendors arriving at the information booth where Momma Shawn (DA MAYOR’S WIFE) and Kaila Nsimbi their daughter where holding it down and helped vendors sign in and get to their assigned locations.

The smile on the vendors faces was priceless as they unpacked and decorated their booths and set up their games and resources to share with the community. Victoriaz Secret Event Planning, decorated the photo booth with a backdrop that said Back to School, BIG B2SB white letters, inflatable bus, street, grass and balloons and spider boy (Miles Morales) spraying webs at the students, so if you took pictures please SHARE. Seattle JazzED opened up with instrumental music, then the Double Dutch Diva’s jumped right in with some double dutch FUN. The ice cream truck (All City Ice Cream) showed up as a school bus; what an amazing idea for a Back2School Bash. I just knew it was going to be one of the highlights of the day for the students. Fathers And Sons Together invited 12 barbers that included Abe’s, Brooks Family, Frank’s, King’s Den and Fade Master Barbershop, and 13 vendors and face painting by LaShawn. We had an opportunity to have meaningful chats about the impact of violence on the lives of families and in our community. Seattle Public Library served over 800 students with books, along with Carriage House Church. The fire department came with the fire truck, and students had a great time putting on the gear and sitting in the truck, and pretending to be firefighters. They even received info on fire prevention from the outreach team. Abundance of Hope Center gave away a ton of clothes, shoes and resources. Not only did CHAMPS RSC coordinate the Rainier Beach Actions portion of the event they gave away a ton of toys and several raffle giveaways, including a Wonder Women Bike, a ten-speed bike, 2 scooters, smart watches and information on the RB Skatepark and Pedestrian Safety Improvement Project. The Youth Activists for Systemic Change (YASC) idea for a slime station was very popular. Yes, they were making and playing with slime. The Detective Cookie Chess Club was there playing and sharing information on the soon to be Detective Cookie Chess Club Park on South Barton Place and Rainier Avenue. Safeway was present and  shared employment opportunities and provided vaccinations. The Seattle Department of Transportation gave away helmets to students. The Atlantic Street Center and its 105 years of experience provided information on the programs and services and by the way the current Executive Director, Dr Pela Terry and former long time executive director Edith Elion was present along with the venerable Theresa Everett.  We presented 11 community members with Unsung Heroes Award, including Edith Elion. The Hi Tee Golf Program was hitting golf balls with students and sharing available programs. I can write a mini book on this eventful historical event: 62 volunteers and RBAC staff members supported the event, 53 vendors registered, over 800 backpacks distributed (shout out to Liberty Roads, United Way and Oracle, AEI Inc), lunch was provided by Urban League of Metropolitan Seattle and FAST Grill Master Fathers and Mothers, Chocolate Chip Cookies by youth entrepreneur Kings Tasty Treats, WASAT and King Jr. Catering food for 950 people. We were ready but not ready for the number of attendees, we ran out of everything. Thanks to Selena Taylor and DJ Mike Davis, Adefua African Music and Dance Center and the Double Dutch Group for entertaining us and keeping a positive vibe in the atmosphere.

Congratulations and thank you all, whether you were present or not on helping make #19 all it needed to be!  Thanks to South Shore PK-8 Principal Justin Hendrickson for giving us access to restrooms and electricity. Thanks to Mike Graham-Squire with Neighborhood House for all the ice and water to keep us ALL hydrated as well.

Fathers and Sons Together

Check us out on: 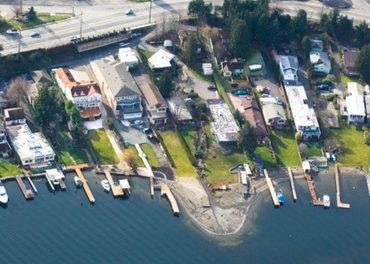 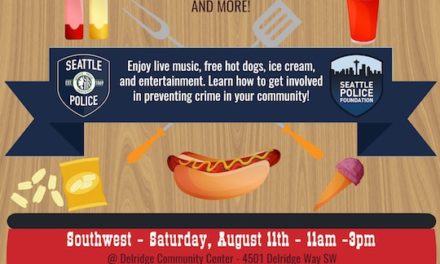