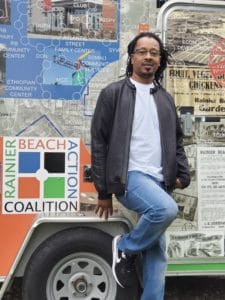 Eddie Grinnell is on a quest to find people from the South End to literally build Seattle. RBAC’s Priority Hire Community Promoter, has been recruiting all over the Rainier Beach area to find people for the Pre-Apprentice Construction training program, happening every Wednesday at Rainier Beach High School.

Eddie goes out to area schools to inform students about the program. He has friends that are coaches at Cleveland, Franklin, and Garfield who connect him to speak to members of their sports teams. There is also construction training facilities available at Rainier Beach High School, where Stephanie Colbert runs the PACT program, one of two programs in Seattle.  Students can earn 2.5 school credits by participating.

Something that sets construction apart from most other trades, is the fact that it accepts people from work release. Finding work after incarceration can be a difficult task, and this program opens up a pathway to be able to live a normal life again. Also, construction jobs tend to pay well.

Eddie is determined to get people into this program. He goes around the community putting up posters/flyers. Interested community members see Eddie’s face on the flyer, and in person as he goes around to job fairs promoting Priority Hire. He also gets referrals from other people that connect him with people who might be interested in the program.  After the initial contact, Eddie then sets up a meeting where he conducts an assessment about whether they are ready to attend the pre-apprenticeship training. After the pre-apprenticeship training, then they are ready to move on to an apprenticeship program.

Eddie is surprised that he is being increasingly recognized in the community as word gets around. He grew up in the CD and played basketball for Garfield, but now you can see Eddie out and about in the South End supporting our community, and hoping that some of his pre-apprenticeship graduates from the South End help build KeyArena. 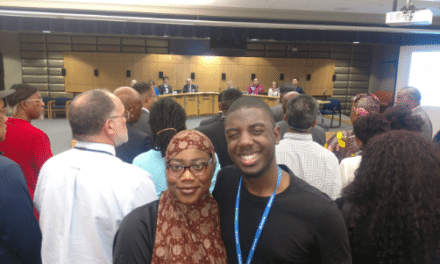