When issues arise,  we don’t always get taught how to create an action plan or discuss how we can make a change. I created my class “Social Movement” to do just that. It is a way for our YATTA’s to feel more comfortable, knowledgeable, and have a better understanding of social movements. This class was meant to spark conversation and analyze a social movement in the past so we could reflect on it using the stages of a social movement. It ran for three weeks and although it was short, it definitely got people thinking. Shout out to my team!!!

What is a Social Movement?

To start it off, I shared a spoken word piece I created in 2016-17 named “ Word to the World.” This is a piece I wrote when I was getting a better understanding of what police brutality was and the injustice that came with it. The first class was to go over what a social movement is, and  to learn the different stages of a social movement. The social movement I chose to share was the Delano Grape Strike and the boycott that followed in 1965-1970, led by Mexican American civil rights activist, Cesar Chavez.

Steps to a Social Movement

For the second week, we watched  the “Cesar Chavez” movie and had a group discussion. It was a chance to see the events they read about and reflect on the movie and how it showcased the stages of a social movement:

What is the issue?

For the final class, it was important to get the root of the issue and make a plan. It’s one thing to talk about the issues we see and another to actually create a plan and execute it. Using what we learned in the past two classes and some knowledge from our Systems Change class led by Jerrell Davis, I wanted to make sure our YATTA’S had the time and space to talk about issues they see and to create their own social movement. So I created a little project called “What is the issue?” For this to work, we created breakout groups led by Jerrell, Zion, and I. Then we regrouped and had each group share out what their issue was and their plan for it. The issues chosen were Food Justice in Rainier Beach, the lack of financial literacy, and a more funny one about how Dreadlocks could bring world peace.

Overall, it was a blessing to have such a supportive team and class. Something I took away from the class was these classes are needed and if no one else is helping our young people, we have to step up – whether we have the knowledge on it or not! We have to take the time.

It definitely starts with the YOUTH! We gotta make sure they have the support and knowledge that they need to succeed. 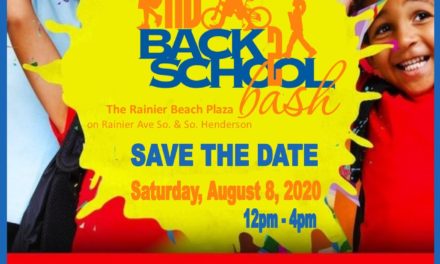 Seattle Department of Neighborhoods seeks your input on survey