We are two months into the summer and are grateful to say that the farmstand has had an amazing turnout. Although we expect it to run from 10am to 2pm, we run out of most of our produce by 12pm, after our initial rush from 10-10:45am This is due to the fact that we are providing the fresh produce for free, and it’s great to see people’s surprised reactions when we tell them so. There are even people that line up at 9:30am while we’re still setting up, which shows how much this service is appreciated by the community.

Not only is the community able to access free produce, but many of them are also trying out new things and discovering foods they wouldn’t have known about before coming to the stand, diversifying their diets with foods such as rhubarb and lemon cucumber.

A good amount of people have been utilizing the online order form where they can select one of four produce box options which will have certain produce inside, and pick it up at the stand to promote social distancing from other customers. They also have the option to request a specific vegetable or fruit if it does not come with the box they selected, and if we don’t offer it at the stand, we try to purchase it for future weeks if possible.

The new location this year at the Rainier Beach Plaza has been successful, largely because it is in such a bustling area, with curious drivers turning their heads and pedestrians being able to pass by and easily notice our stand. While we attract new customers every week, we also have a lot of returning customers– a good amount of them being the elderly or adults with children. It’s great to hear about the kinds of recipes they make with the produce they receive, or how the set-up of the stand reminds them of the markets in their home country.

We don’t entirely realize our impact until we hear it directly from the customers. For instance, a woman who comes consistently was happy to share her experience with us on how she was able to decrease her blood sugar levels because she now had access to free, healthy produce. She even told the farm stand team “My doctor loves you guys,” which was heartwarming to know and is why we do what we do.

Although cherries have gone out of season, we have now been able to get corn which is a popular favorite. We are proud to say that the food is locally grown in Washington state and comes from many POC farmers such as Kamayan Farm, Nurturing Roots, and Alvarez Organics. The farm stand team encourages you to stop by. We will be operating for the rest of the season until September 26th, so hope to see you soon! 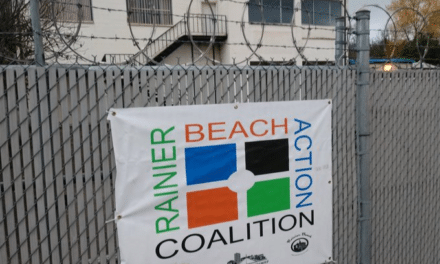 Kick-off Celebration for Community Power works for Home, May 3