Why Seattle Should Invest in Community-led Crime Prevention Programs

Why Seattle Should Invest in Community-led Crime Prevention Programs

Note: This article discusses the cost of gun violence from an economic perspective. That doesn’t mean we don’t recognize the traumatic effects of gun violence. We acknowledge that every loss of life due to gun violence causes immense suffering, and that there are no words to convey the depth of pain, loss and trauma that a family and community undergoes when a beloved individual dies before their time. It’s a tragedy and a grave injustice that we are committed to ending.

Ever notice the events on Friday nights around Rainier Beach that look like mini street fairs? Those are A Beautiful Safe Place for Youth’s community activation events, and they’re nothing short of extraordinary. Stop by some time. You’ll be welcomed by a friendly neighborhood face, and there will be food, information and activities available for you. Here’s what makes these activation events so incredible though – they are undoubtedly making the neighborhood safer.

Let’s consider this statistic from a financial perspective, which is often neglected when discussing gun violence…

The cost of gun violence is staggering. In his 2019 book Bleeding Out, Thomas Abt (Senior Fellow, Council on Criminal Justice) suggests that the cost of gun violence in the US costs every American between $531 and $1,020 each year, paid out in forms of higher taxes, higher insurance premiums, and lower property values. With every incident there is a police response; a paramedic response; a criminal investigation; a search for suspects; a trial; holding suspects in jail pre-trial; a prison sentence; and heaven forbid, a coroner’s office investigation; and bereavement paid to families – Each step costs thousands and thousands of dollars. When considered collectively, the costs are enormous. A recent study by the Urban Institute and the National Institute for Criminal Justice Reform, conducted in Washington DC last year, estimated that each shooting cost the city’s taxpayers at least $1.53 million dollars.

Beginning next month, we will be activating four different Rainier Beach locations four nights per week! And we could use some help! We’re looking for volunteers to help in a myriad of ways as we expand our efforts to make the neighborhood safer! Signup at rbactioncoaltion.org/volunteer/

Stories Spark Action at The Gathering 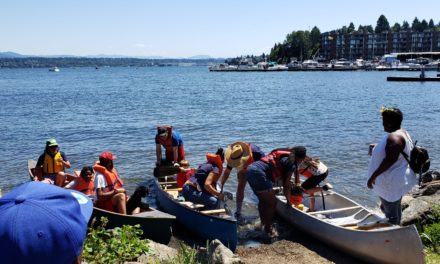